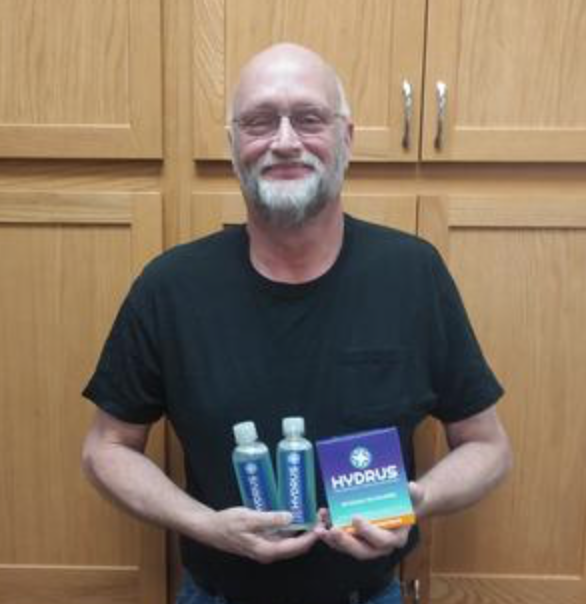 06 May Hydrus Changed My Life With POTS & Dysautonomia

Pat White was athletic, vibrant, and active for his first 52 years of his life, until he was stricken with Postural Orthostatic Tachycardia Syndrome or POTS, which debilitated him so severely that it kept him bedridden for most of the next 5+ years.

Within two weeks, Pat’s life changed for the better.  His best friend discovered the Hydrus Challenge (see https://hydrusedge.com/pots-2/) and suggested he give it a try to combat his chronic dehydration. He was intrigued with the science behind Hydrus, the Nanosome(TM) electrolyte encapsulation. Pat immediately placed an order for Hydrus.  It arrived two days later, just before he was to go into the ER for another I.V. treatment. Instead, Pat drank his first 16.9 oz. serving of Hydrus. After about 40 minutes, Pat could feel the hydration and his body recovered.  About 5-6 hours later, he felt like having another Hydrus.  This time he could feel his body hydrating after 10 minutes.  A few hours later, he didn’t feel the need, but thought he would drink another Hydrus, which flowed through him, demonstrating that he was indeed very well hydrated.  He felt terrific and enjoyed his best sleep in a very long time.

For the next 10 days, he felt fantastic and became much more active each day.  In fact, he was more active than he had been in almost 8 years.  Then, he was struck by a virus.  For the next few days he was unable to eat or drink.  His family wanted him to go in for another I.V., but when he was able to keep water down, he started back on Hydrus.  He recovered completely.

A few days later, Pat went to work at his security job.  When he was making the rounds he was stricken by a severe POTS attack that took him to the ground immediately, causing him to lie down in the parking lot until he was able to stand and walk briefly until being stricken again.  This went on 5-6 times over the next 20 minutes until he got back to his post where he left his Hydrus.

By the time he finished a 16.9 oz. Hydrus serving he was feeling good enough to stand up and begin to walk about.  After the second Hydrus he felt very good and was able to finish his rounds for the remainder of the shift.

For the first time in 2½ years, daily Hydrus enabled Pat to go without I.V. therapy for over one month. His daily activity is higher than in 8 years and he feels energetic, instead of lethargic.  Pat shares his POTS experience with the hope that others afflicted by similar conditions can change their lives for the better, too.

Hydrus’ Nanosome (TM) electrolyte encapsulation delivers water and electrolyte absorption as much as 8 times more effectively than anything else.  The speed and effectiveness of Hydrus provides hydration that enables Pat to break away from debilitation and become active again every day.  He carries Hydrus with him throughout the day to maintain hydration and freedom from I.V. therapy.

“Hydrus or an I.V. are the only two things I can count on to work fast when I need it and keep me feeling well hydrated.  Now, I’ve found Hydrus, I don’t expect to need another I.V.,” said Pat.

By taking two Hydrus servings per day on inactive days and one or two more servings as his activity increases, Pat believes everyone with POTS and low blood volume conditions like his has a good chance to change their life for the better, too.  Please see https://hydrusedge.com/pots-2/ for more information.

We welcome your story of discovery and change.  Please reach us by pressing Contact Us / Support.